How’s that second-quarter rebound working out for the US? It’s still a shaky affair, but there are signs that the macro trend has strengthened a bit, based on a preliminary review of sentiment indicators for May. At the very least, the latest numbers suggest that that the US isn’t slipping into a recession. Growth is still weak, but to the extent that we can discern a bias in the big-picture change for the current month vs. April, the comparison is positive overall via the latest round of numbers.

Consider the manufacturing indexes for the five regional Fed banks for May. Three of the five posted positive readings for this month, which lifted the median change for the benchmarks into positive terrain for the first time since February. The improvement is slight, but the return of an upside bias implies that the worst has passed. 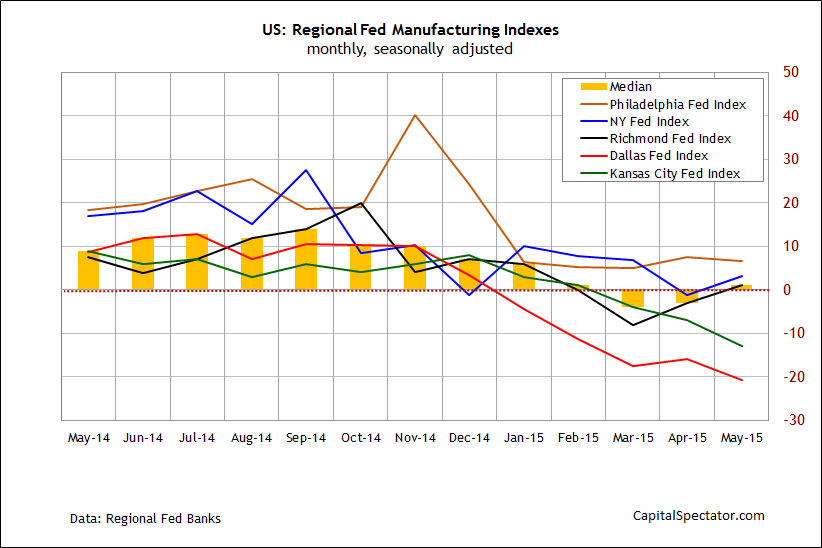 Meanwhile, this month’s initial estimate of the US Services Purchasing Managers’ Index (PMI) reflects a solid pace of growth. Although the headline number dipped slightly in May, the survey results indicate the “sharpest upturn in payrolls numbers since June 2014,” Markit Economics noted in a press release yesterday. 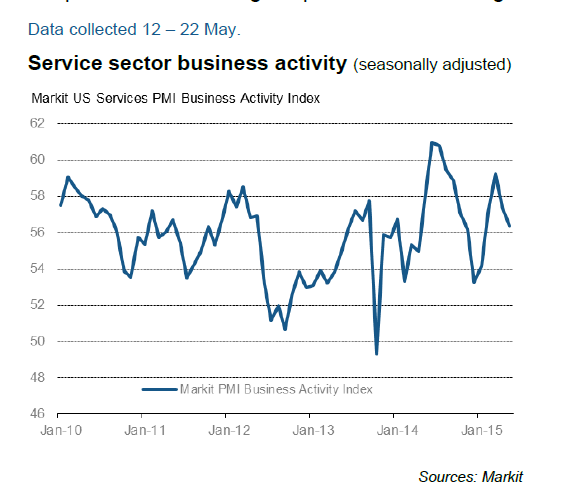 As for manufacturing, Markit reported last week that the May profile, while still positive, is considerably weaker in this corner. The index dipped to a 16-month in this month’s flash estimate, although it remains moderately above the neutral 50.0 mark that separates growth from contraction. 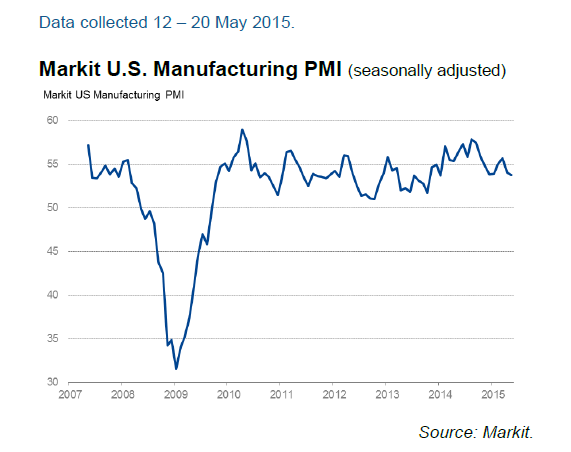 Meanwhile, the outlook from the vantage of Main Street improved slightly in May, according to yesterday’s release of the Conference Board’s index of consumer confidence. This measure of the mood ticked up to 95.4 for this month’s reading vs. 94.3 in April. “Consumer confidence improved modestly in May, after declining sharply in April,” said the Conference Board’s Lynn Franco. She explained that

After a three-month slide, the Present Situation Index increased, propelled by a more positive assessment of the labor market. Expectations, however, were relatively flat following a steep decline in April. While current conditions in the second quarter appear to be improving, consumers still remain cautious about the short-term outlook.

Based on the numbers published so far for this month, it’s reasonable to say that the broad trend revived a bit in May. It’s a weak rebound, but based on May’s numbers to date it appears that the economy’s forward momentum picked up on the margins. Even so, the economic trend is expected to remain painfully weak.

The Atlanta Fed’s new projection for GDP’s second-quarter expansion ticked up to 0.8% in the May 26 revision–better, but still a dangerously slow pace. 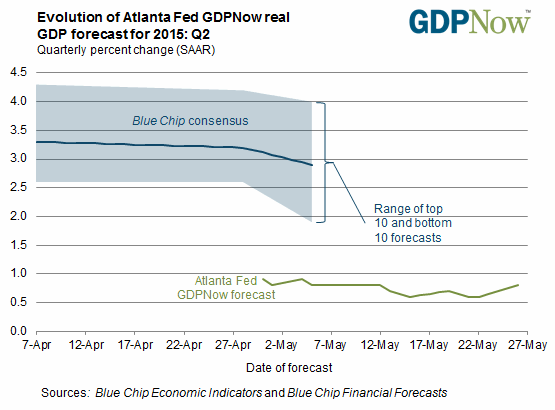 Speaking of GDP, this Friday’s release of revised Q1 figures is expected to show that the economy contracted. Econoday.com’s consensus forecast sees a decline of 0.8% for Q1–a substantial downgrade vs. the 0.2% rise that was initially reported.

The bottom line: the US economy is still struggling. The good news is that there’s a whiff of improvement bubbling at the midway point for Q2. But there’s little if any margin for negative surprises. The latest figures are mildly encouraging, but that doesn’t change the fact that the state of US macro remains in a precarious phase.