Yesterday’s upbeat report on consumer spending and income in the US provides fresh support for last week’s moderately hawkish comments from Fed officials, who hinted that another interest-rate hike is near, perhaps as early as next month’s Federal Open Market Committee (FOMC) meeting. Yet support for pricing in a new round of policy tightening is modest at best via Treasury yields. Is that because job growth is expected to slow in this Friday’s employment report for July after two months of strong increases?

Total nonfarm payrolls are on track to rise by a moderate 175,000 in August, according to Econoday.com’s consensus forecast. That’s a decent gain, but it’s well below July’s increase of 255,000 and July’s 292,000 surge. Monthly data is noisy and so it’s best to focus on the year-over-year trend. The August estimate translates into a 1.74% increase vs. the year-earlier level, fractionally above July’s annual pace.

Job growth has clearly slowed in year-over-year terms, which isn’t terribly surprising for an economic recovery that’s celebrated its seventh birthday in June—one of the longest expansions on record, according to NBER data. The question is whether the Fed will feel compelled to continue squeezing rates when the trend for job growth is on a downward trajectory?

The Treasury market isn’t discounting the possibility of a rate hike in the near term, but there’s still a fair amount of skepticism. Consider the 2-year yield, which is highly sensitive to rate expectations. Although this widely followed maturity has bounced higher in recent weeks, yesterday’s rate eased to 0.81%, based on daily data from Treasury.gov. That’s still well below the nearly 1.0% rate that prevailed in early March, when fears were widespread that a new recession was lurking. 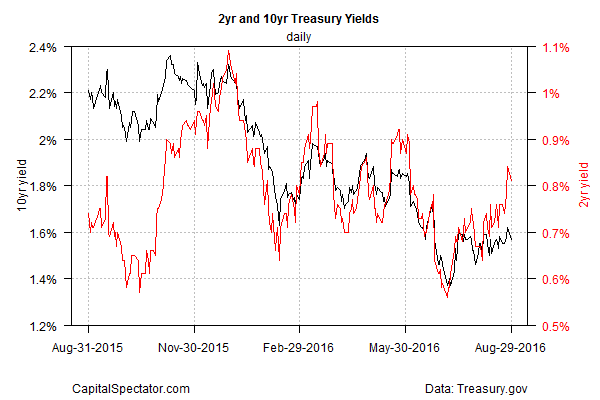 Fed fund futures yesterday (Aug. 29) were pricing in a 21% probability of a rate hike for the Sep. 20-21 FOMC meeting, down slightly from last week’s peak, based on CME data.

Is the crowd is underestimating the prospects for a rate hike? “At some point, if the Fed thinks the market misunderstands, there’s a very clear way that they can realign those expectations, and that’s by saying, look our economy is in very fine shape,” Carl Tannenbaum, chief economist at Northern Trust, tells CNBC. “It’s different from others, so we don’t have to do what other central banks are going to do, and in order to avoid financial excess down the road, we’re going to remove just a little bit of excessive monetary accommodation.”

Friday’s employment report will no doubt be a key factor for moving market sentiment, one way or the other. Meantime, Treasury yields leave room for doubt about the timing of the next rate hike, in part because inflationary pressure remain muted. Despite relatively firm growth in consumer spending, the core personal consumption expenditures (PCE) price index, which excludes the volatile food and energy components, rose just 1.6% for the year through July—comfortably below the Fed’s 2% target.

The consumer spending report for July “is a mixed bag for the Fed,” says Michelle Girard, chief economist at RBS via Reuters. “While the consumer sector is continuing to advance solidly, progress towards the Fed’s inflation mandate has stalled. It strengthens the case for an increase in interest rates, but does not suggest an urgency for policymakers to act in September.”

Downward momentum still has a head of steam for the benchmark 10-year yield as well, based on a set of exponential moving averages (EMAs). 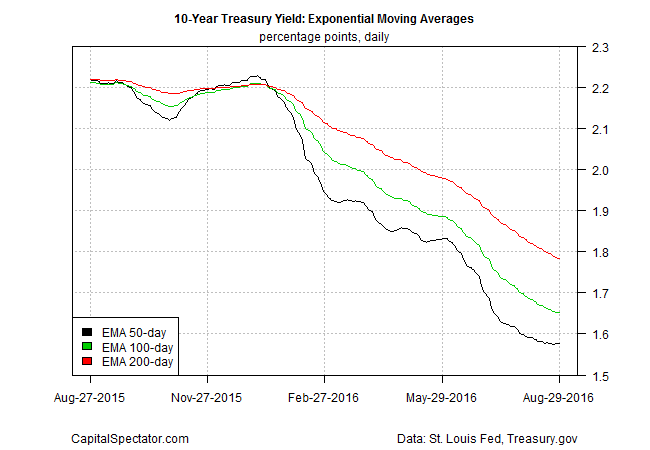 EMAs for the 2-year yield, on the other hand, appear to be close to reversing, which would signal higher odds for higher rates in the months ahead. 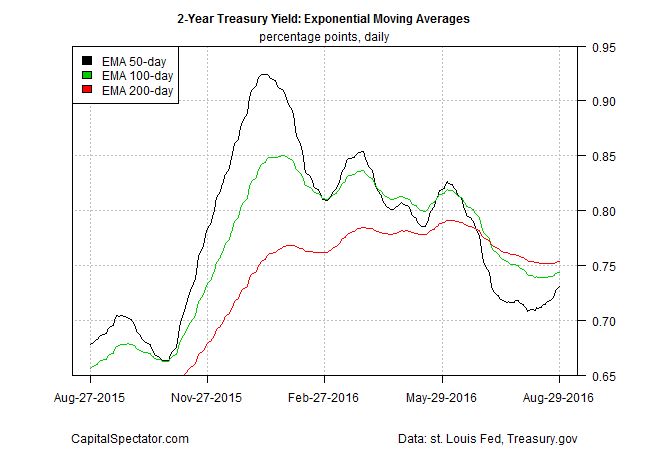 Much depends on how this Friday’s update on August payrolls compare. But as Bloomberg advises, “August nonfarm payrolls have fallen short of estimates in each of the past five years.”

Perhaps the Treasury’s market’s skeptical outlook the prospects for a rate hike is warranted after all.

2 thoughts on “A Rate Hike Next Month? The Treasury Market Has Doubts”