New residential housing construction bounced back in July. Although the consensus forecast was looking for a handsome rebound, the actual results were substantially better than expected. Housing starts revived to a 1.093 million annualized rate last month, which is well above the revised 945,000 pace for June. Newly issued building permits also posted a strong improvement in July. The bottom line: the worst fears for the housing sector have crumbled in the wake of today’s release from the US Census Bureau.

Housing has been a weak spot for the economy lately and so today’s news boosts the odds that the US macro trend will perk up a bit. It’ll take another few months to decide if housing has truly recovered some degree of its former momentum. But today’s numbers certainly look encouraging.

Consider how starts and permits compare with the benefit of today’s July’s update. As the chart below shows, starts are advancing at a year-over-year pace that’s near the best levels in recent history. Today’s upbeat data sends a message that the housing recovery is still alive. While the rate of growth may be moderating, it seems that the odds for a dark turn for this key sector are lower than it appeared in the spring. 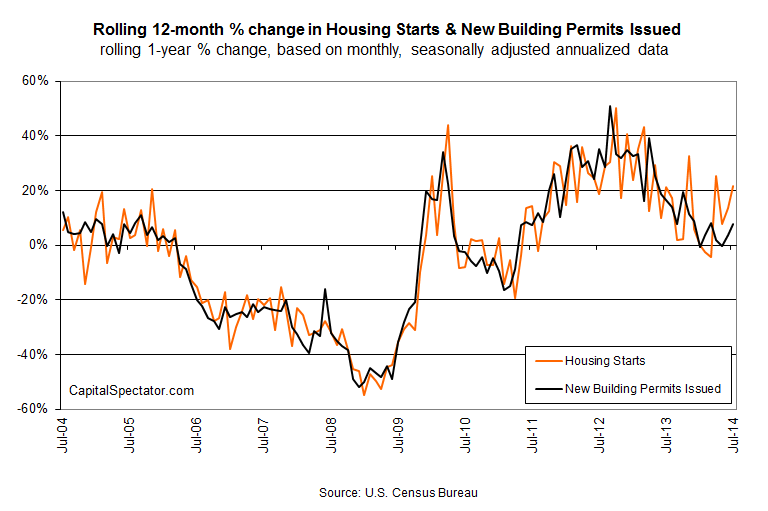 Perhaps the latest data isn’t terribly surprising after all, given the relatively strong run for payrolls in recent months. Indeed, the fact that the rest of the economy has shown a fair amount of resilience was always the strongest reason for thinking that the housing rebound from the Great Recession would roll on.

“Recent news on the housing front has been relatively encouraging,” Gennadiy Goldberg at TD Securities wrote in a research note, according to Bloomberg. “With affordability remaining high, mortgage rates still low, and labor market activity accelerating, we expect the housing market trajectory to continue gradually improving in the coming months.”