The World Bank and two influential economists–Larry Summers and Paul Krugman–have joined the do-not-raise-rates club of doves. The Treasury market, however, is still expecting that the Federal Reserve will tighten monetary policy at next week’s meeting, according to the rate-sensitive 2-year maturity, which ticked up to a seven-week high of 0.75% yesterday (Sep. 9) via daily data from Treasury.gov.

Yesterday’s upbeat numbers on job openings certainly boosted the hawks’ case—employers advertised a record high for new positions in July, according to the US Labor Department. But the optimism bubbling from the US labor market, which extends across a range of indicators through August, is offset to a degree by ongoing worries about the global economy, largely due to concerns over China’s faltering growth.

Nonetheless, yesterday’s incremental increase in the 2-year yield marks a return to a four-year high that the market has touched several times in recent months before declining in subsequent days and weeks. Will the latest rise of the 2-year yield endure—and go on to new highs—this time? The answer, of course, depends on the crowd’s confidence—or the lack thereof—in the Fed’s willingness to squeeze policy next week. 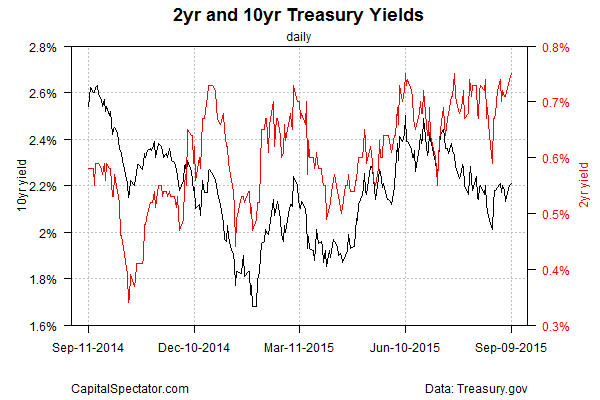 The 2-year yield suggests a rate hike is near, but the odds for tightening next week fades once you look elsewhere. As you can see in the chart above, the benchmark 10-year rate, although inching higher lately, is still well below its recent highs.

Meanwhile, the market’s inflation estimates remain close to the lowest levels so far this year. In fact, the latest inflation estimate from the Billion Prices Project @ MIT shows a slight whiff of deflation has returned to the US. Official inflation data is still in the black, although well below the Fed’s 2% target. 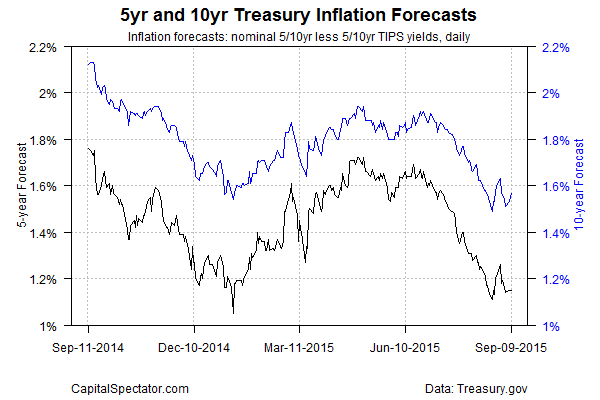 Mixed messages are also front and center when reviewing yield momentum through a prism of exponential moving averages (EMAs). As the chart below shows, the 2-year yield’s upside bias is still quite strong through Sep. 9. 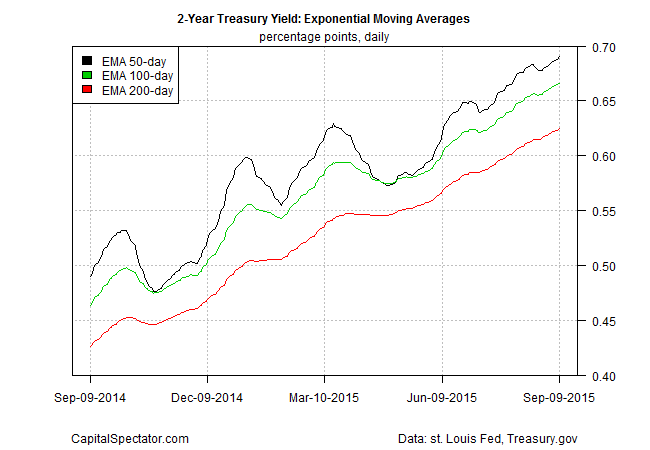 It’s another story for the 10-year yield, which appears to be in the process of rolling over and slipping into a bearish pattern once more via EMAs. 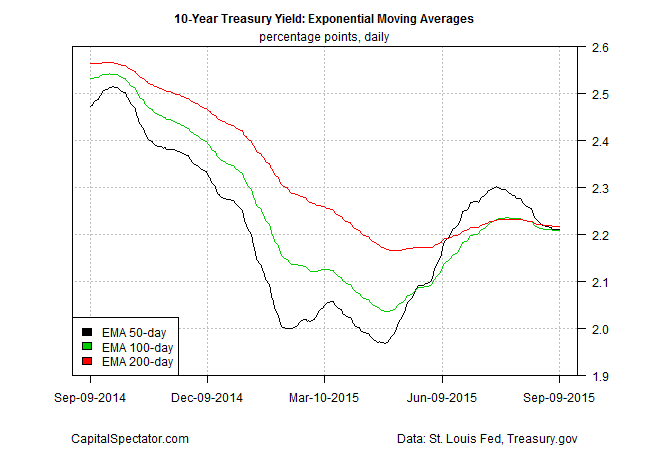 The muddy waters in monetary affairs appears to be weighing on Fed officials, according to The Wall Street Journal’s well-connected reporter Jon Hilsenrath. In a story posted yesterday, he writes that “Federal Reserve officials aren’t near an agreement to begin raising short-term interest rates heading into a crucial week of private discussions before their Sept. 16-17 policy meeting, according to their recent comments.”

The Treasury market is also hedging its bets, or so it appears via the conflicting messages in the 2-year and 10-year yields. The question is whether the hawkish signals in the 2-year yield can survive the growing calls for the Fed to cease and desist with any plans to start squeezing policy next week? We may have an answer as early as today.