The third installment of analyzing equal weighting for asset allocation reviews the results for maintaining identical weights for funds and asset classes. In the previous posts in this series (here and here), the equal weighting was applied to the funds but not the asset classes. As we’ll see, imposing a higher level of equality isn’t encouraging for an equal-weighted asset allocation.

Maintaining equilibrium weights for funds and asset classes is easier than it sounds. In order to deliver this double-faceted symmetry it’s necessary to rejigger the list of funds in the test relative to the opportunity set in the previous posts. Here’s one possibility: 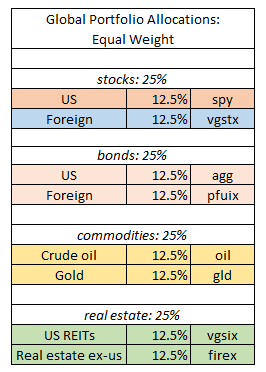 For the strategic weighted mix, here’s the equivalent allocation:

As a reminder, the strategic mix is inspired by a simple 60%/40% global stock bond allocation and taking five percentage points from each side and reallocating to 5% real estate and 5% commodities–a 10% weight in so-called alternative assets overall.

As before, unrebalanced and year-end rebalanced (back to the respective target weights) portfolios are reviewed. But as you can see in the graph below, this time the results show considerable variation, which contrasts with similar risk/return profiles all around in the previous tests.

Notably, the equal-weight strategies stumbled over the last two years. Prior to 2014, all the strategies delivered generally equivalent results, in line with the previous tests. The headwind for equal weighting this time was strong enough to take squeeze the equal-weighted portfolios over the full sample period (2007-2016). Indeed, the equal-weighted return is considerably lower, which translates into a hefty decline in the risk-adjusted results (lower Sharpe ratios).

What happened? Allocating equal weights to the asset classes and the funds raised the influence in commodities, which have been in a bear market for much of the past two years. It doesn’t help that our proxies for commodities are limited to two funds representing oil and gold. Perhaps a more nuanced list of funds all around would deliver different results.

In any case, it’s clear that risk and return is highly sensitive to the choice of funds in a strict dual-faceted implementation of equal weighting. The question is whether we can revive equal weighting’s prospects with a different set of funds. I’ll explore the possibilities in an upcoming post.