With less than three weeks before the last trading session of the year, equity markets in the Mideast appear set to deliver the strongest (and perhaps only) gain for 2018 among the world’s major regions, based on a set of exchange-traded products.

Despite a surge in market volatility around the world in recent months, WisdomTree Middle East Dividend (GULF) has remained mostly steady, holding on to a solid year-to-date performance. The ETF, which tracks a fundamentally weighted index of companies that pay dividends, is up 10.4% this year through yesterday’s close (Dec. 11). The fund is the only regional Mideast equity ETF and its bull run for 2018 is an upside outlier compared with the rest of the field.

The US equity market is technically in the black, but just barely, based on the SPDR S&P 500 (SPY). At the close of trading on Tuesday, SPY’s total return was a slight 0.3% for the year.

Otherwise, the major regional slices of the global equity markets remain underwater for 2018, in several cases by substantial degrees. The biggest year-to-date loss continues to be held by VanEck Vectors Africa (AFK), which is has been cut by nearly 20%.

The widespread selling across most global equity markets generally this year is conspicuous via Vanguard Total World Stock (VT), which is currently nursing a 6.7% year-to-date decline. 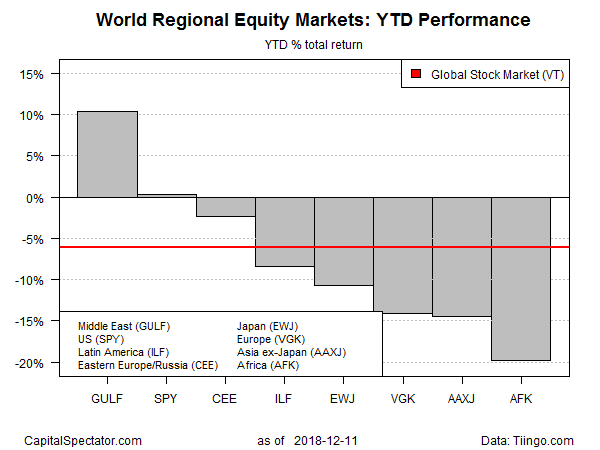 The performance chart below highlights the strength of GULF (black line at top) relative to the rest of the world this year. Short of a miracle rebound in one of the world’s leading equity regions – or a dramatic collapse in GULF — it appears that Mideast shares are destined to retain the top-performer label by a wide margin when the final trades for 2018 clear.

The weakness across most equity markets has left global stock valuations at five-year lows, according to The Wall Street Journal. The forward price-to-earnings ratio for world equities has dropped to just above 13 times. “That’s down from more than 16 times in early 2018, according to FactSet’s World stock index, which includes tens of thousands of listed securities around the world.”

Global stocks rose today following reports via President Trump that the US is talking with China to resolve the trade dispute between the two countries and that he wouldn’t raise tariffs on Chinese imports until a deal was worked out. “We are seeing risk sentiment stabilizing a bit,”  Societe Generale strategist Alvin Tan tells Reuters.

The upbeat news may be short-lived, but for now it offers hope that world equities may be able to claw back some of the year-to-date losses by the end of the month. Nonetheless, Vanguard Total World Stock (VT) appears on track to end with a loss for 2018 while the Mideast performance via GULF seems due to deliver an outsized return for the year.