The prospects for a rebound in US manufacturing in the second quarter took a hit today with the initial April estimate of Markit’s Purchasing Managers’ Index (PMI) for the sector. The sentiment benchmark eased to its lowest reading in more than six-and-a-half years. The data is still reflecting growth, but at a sluggish rate.

“The survey data are broadly consistent with manufacturing output falling at an annualized rate of over 2% at the start of the second quarter, and factory employment dropping at a rate of 10,000 jobs per month,” said Chris Williamson, chief economist at Markit. 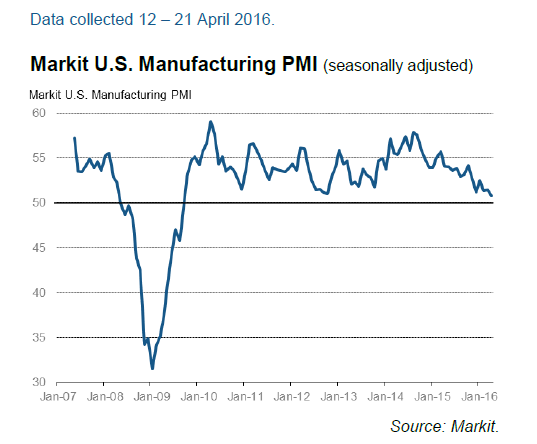 The PMI update follows mixed news for two regional updates of manufacturing activity in the US for this month. The New York Fed’s Empire State Index jumped to its highest level in a year in April, prompting some analysts to predict that the manufacturing sector was finally reviving after a long run of weakness. But yesterday’s update of the Philly Fed’s manufacturing index took a dive in April, returning to a contractionary reading after posting a solid gain in March.

We’ll have deeper perspective on May 2, with the arrival of the ISM Manufacturing Index for April, another benchmark that tracks the sector on a national basis. It’s interesting to note that the ISM data has been much weaker than the PMI numbers recently. But in March, the ISM’s yardstick jumped into positive territory (above the neutral 50 mark) for the first time since last August. Will the ISM’s revival continue in the upcoming April report? Today’s PMI release raises some doubts.

But there may be a silver lining in the PMI data, or so one can reason. Markit’s Williamson outlines the potential for better days ahead. “New business levels and employment both rose at slightly stronger rates and the manufacturing PMI emerged from near-stagnation in February and March to a three-month high,” he observed. “The upturn in the goods-producing sector was supported by stronger demand, especially from foreign markets, and a return of employment growth.”

Looking beyond sentiment data, however, paints a darker profile. Indeed, the hard data for industrial activity looks worrisome. In particular, the year-over-year trend for industrial output was negative in March for the seventh straight month, the Federal Reserve reported last week.

Given the latest run of numbers, there’s a lot riding on the upcoming ISM report to keep hope alive. But if the April ISM index slips back under the neutral 50 mark, the news will send a dark message about the outlook for manufacturing and beyond.