US Retail sales increased 0.9% in March, the first monthly rise since last November, the Census Bureau reports. The gain — the strongest in a year — pulls this key indicator back from the brink of what had been an ominously developing trend—three back-to-back monthly declines through February. But while today’s numbers suggest that consumer spending may be on the upswing again, the latest figures still leave room for doubt until we see more data. Why? The year-over-year comparison, while still positive, continues to slide.

Headline retail spending advanced 1.3% in March vs. the year-earlier level, a sizable dip from February’s 1.9% gain and well below the 3%-to-5% increases that were typical through much of last year. As a result, retail sales in annual terms last month rose at the slowest pace since 2009, when spending was still under pressure from the aftershock of the Great Recession. Not a good sign… if the deceleration continues. 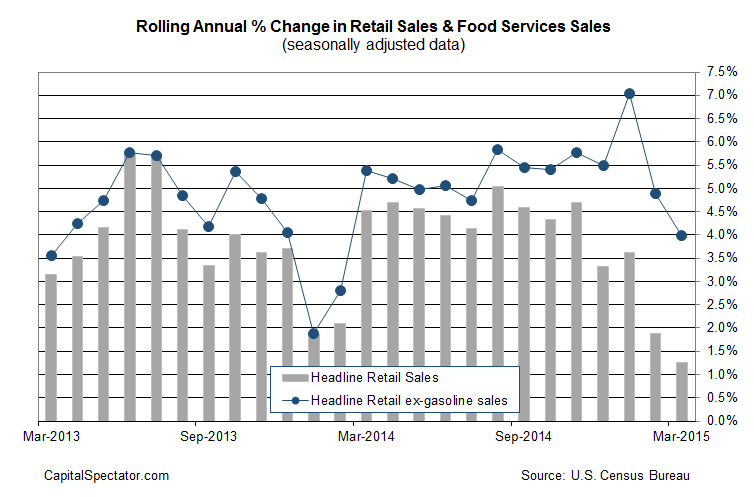 What’s more, this isn’t about low/falling gasoline prices. Headline retail sales ex-gas are also caught up in a deceleration phase. This measure of spending was higher by 4.0% on a year-over-year basis through last month, but that’s down sharply from 5%-plus level in recent history.

“The U.S. consumer is cautious and not ready to go on a shopping spree just because gas prices are lower,” Thomas Costerg, an economist at Standard Chartered Bank in New York, tells Bloomberg. Nonetheless, he’s still optimistic, predicting that spending will “accelerate as we go through the year.”

Ian Shepherdson, chief economist at Pantheon Macroeconomics, is also looking for a recovery in the months ahead. “The continued buildup of cash savings from the drop in gas prices … suggests to us that we should expect very strong retail sales numbers over the next few months,” he reasons.

One of the brighter spots in today’s report is the strong rise in auto sales, which climbed 2.7% last month, the most in a year. The logic here is that a firming in demand for big-ticket consumer items implies that spending on Main Street generally will bounce higher in the near term.

Maybe, but the latest figures overall still paint a modestly upbeat picture of spending at best. As such, bears and bulls have reasons to argue that the numbers are confirming their assumptions about what comes next.

Meantime, at least one analyst thinks there’s enough juice in today’s release to reaffirm the outlook that the central bank will begin raising interest rates before 2015 ends. “A rebound in retail sales in March provides evidence that the U.S. economy is pulling out of a soft patch seen at the start of the year,” advises Chris Williamson, chief economist at Markit Economics. “The improvement in retail sales after the weakness seen at the turn of the year adds to the likelihood of policymakers voting to hike rates this year.”