Economic news for the US has been encouraging in recent days, but rising tensions between the United States and North Korea have refocused the crowd’s attention on the potential for war. Predictably, President Trump’s blunt warning on Tuesday that North Korea faced “fire and fury” if it continued to threaten the US revived the appetite for safe havens, including Treasuries.

The renewed demand for government securities pushed the policy sensitive 2-year yield down to 1.33% yesterday (Aug. 9), marking the lowest level since mid-June, based on daily data via Treasury.gov. The benchmark 10-year yield fell to 2.24%, matching the lowest rate for the past two weeks. 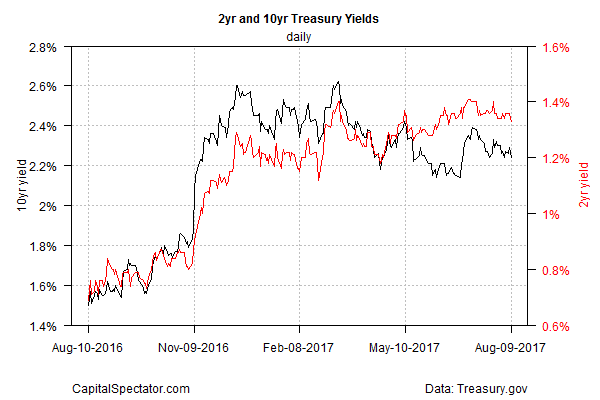 War talk has also lifted the price of gold, which is considered a secure port in times of crisis. SPDR Gold Trust (GLD), an ETF proxy for the precious metal, jumped to a two-month high at Wednesday’s close.

Meantime, sellers dominated trading in the US stock market over the past two days. The S&P 500 posted modest losses on Tuesday and Wednesday, although the index remains close to a record high.

The return of the risk-off climate is probably a temporary setback, assuming that the war of words between Washington and Pyongyang doesn’t lead to military action. If cooler heads prevail, the upbeat economic data for the US will likely reassert control over markets and boost Treasury yields and equity prices once more.

Following last week’s upbeat numbers on payrolls for July, the Labor Dept. on Tuesday reported that US job openings in June jumped to a record high (based on data that dates to 2000). The same report, however, revealed that new hires fell sharply, prompting some analysts to warn that a tightening labor market could create headwinds for the economy in the months ahead.

“Companies are running out of workers to hire to do the job or even train to do the work, and this is a ticking time bomb for economic growth,” Chris Rupkey, chief economist at MUFG, told Reuters yesterday. At the same time, the surprisingly strong rise in job openings suggests that the Federal Reserve may still raise interest rates next month. “Today’s JOLTS data bring a September meeting balance sheet unwind announcement a little closer to reality,” Rupkey advised.

Perhaps, but Fed funds futures are still forecasting a near-zero chance that the central bank will lift rates at the Sep. 20 FOMC meeting, based on CME data in early trading today.  Ditto for the Nov. meeting. The Dec. policy announcement, on the other hand, is still considered in play, with futures projecting a roughly 45% probability that the Fed will lift its current 1.0%-1.25% target rate.

The recent rebound in market expectations for higher inflation offer a degree of support for the monetary hawks. The yield spread on the nominal 5-year Treasury yield less its inflation-indexed counterpart rose to 1.70% on Tuesday, a two-month high.

But economic data may take a backseat for the near term, courtesy of the elephant in the room. The blowback has been modest so far for US markets, which speaks to the reslience of the economy. Nonetheless, “right now it is all about risk management,” says Edward Acton, a strategist with Citi. “Treasuries as always remain a haven asset and garner support in these moments.”

Geopolitical risk, in short, remains front and center. The storm may pass, but in the meantime dismissing the threat, real or perceived, may not be so easy if the war of words continues. Chatter about nuclear war at the highest levels of government, after all, is hard to overlook, even for battle-hardened cynics.

“I am not exactly sure that the President has fully appreciated that when he speaks,” observed Republican Senator John McCain on Tuesday. “The most powerful person in the world – his words reverberate all over the world.”

One thought on “War Of Words Reignites Demand For Safe Havens”