It’s a new year and that means that it’s time to roll out a new round of predictions. There’s no reason to think that turning the calendar to January is any more productive for prognosticating vs. flipping the page to, say, April. On the other hand, there’s something about a newly minted year that brings out the forecasting beast in all of us. For good or ill, we’re up to our eyeballs in freshly baked prophecies. Heck, maybe a few of them will actually turn out to be correct. Meantime, here’s an assortment of recent arrivals to feed your habit…

Top Risks 2016
Eurasia Group
The Middle East is the most vulnerable to a geopolitical leadership vacuum and is heading toward conflagration. There are six failed states across the broader region (Afghanistan, Iraq, Libya, Mali, Syria, and Yemen) and more refugees than ever recorded. ISIS has become the most powerful terrorist organization in history. Oil economies are under strain. All of this will get worse in 2016.

Nassim Nicholas Taleb on the Real Financial Risks of 2016
The Wall Street Journal
Worry less about the banking system, but commodities, epidemics and climate volatility could be trouble

Global Markets in 2016: Four risks to watch out for
Global Risks Insights
1. A Chinese economic slowdown, dragging Asian EM countries down with it
2. Oil prices tumble further
3. Federal Reserve hikes rates faster than global economy can handle sustainably
4. Japan and Europe are unable to pull out of recession despite QE largesse

The Great Disruption: From Brawn to Brain
Yardeni Research
During 2016 and beyond, I will continue to investigate a new long-term theme: “The Great Disruption.” It is increasingly obvious that technology is disrupting business models. That’s what it has always done. It just seems to be doing it faster and in more industries than ever before.

Inklings of inflation in the rich world are outweighed by downward pressure on prices elsewhere
The Economist
Financial markets are priced for continued low inflation or “lowflation”. A synthetic measure, derived from bond prices, puts expected consumer-price inflation in America in five years’ time at around 1.8%. That translates into an inflation rate of around 1.3% on the price index for personal-consumption expenditure (PCE), the measure on which the Federal Reserve bases its 2% inflation target. Ten-year bond yields are just 2.3% in America, and are below 2% in Britain and below 1% in much of the rest of Europe. The price of an ounce of gold, a common hedge against inflation, has fallen to $1,070, far below its peak in 2011 of $1,900. Yet market expectations are often confounded. Economic recoveries are maturing. Labour markets are tightening. Could inflation be less subdued than expected in 2016? 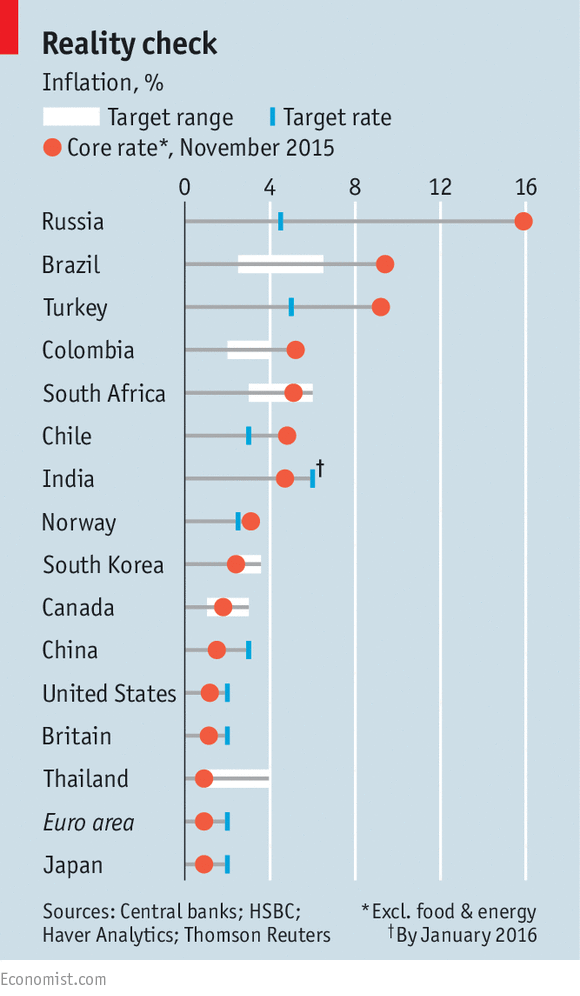 2 thoughts on “The Crystal-Ball Business For 2016: A Brief Sampling”