The stock market has been famously described as a discounting machine. The machine isn’t flawless and so there’s always a risk that the forecast du jour is misleading. But it’s been right enough of the time to inspire monitoring Mr. Market’s real-time outlook, if only as one of several tools for looking ahead. The first challenge is filtering out the noise in the short term. We can start by reviewing rolling 12-month percentage changes in equities and comparing that with the equivalent for the economic trend.

Consider how annual changes in the S&P 500 compare with a basket of leading economic indicators (for a list, see the table in this post). The ebb and flow of stock prices on an annual basis does a pretty good job of capturing major turning points in the economy. Unfortunately, it’s rarely clear (if ever) when those turning points are in gear when evaluating conditions in real time. The best we can hope for is that the equity market offers an early clue of where the economy’s headed after the major turning points.
For example, the 12-month change in the S&P 500 was clearly flashing a warning signal as 2008 unfolded. By the time of the financial crisis in Sep 2008 and beyond, the equity market had been telling us for months previous to be cautious. Meanwhile, the sharp revival in the S&P 500’s rolling 12-month percentage change was flashing an early prediction of economic revival in the second-half of 2009. Recall that months later the recession was formally declared over as of June 2009 by NBER. According to the stock market, that was old news by the time the press release was published in September 2010. 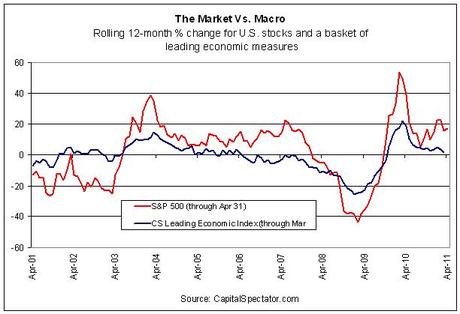 For additional context, we can watch the market’s trend relative to the economic reports that are thought to offer the strongest clues about the future. The difference between the stock market and the leading indicators is easier to see if we graphically measure the divergence alone, as per the second chart below. It’s useful to note that in February 2010, on the eve of the spring/summer slowdown in the economy, the spread between the S&P 500’s annual change and the leading indicators topped out. By the following August, this spread hit bottom, signaling a revival in the fortunes of the economy and the stock market.

As usual, there’s a lot less clarity in trying to divine the future from current prices. All the more so when the market and the economic trend aren’t at extremes. That means that a gray area dominates most of the time. Yet there’s a fair amount of divergence in what the market seems to be forecasting and what the leading indicators are reporting these days. For the moment, the market continues to anticipate ongoing economic growth. By contrast, the pace is falling for the rolling 12-month change in the leading indices.
But there’s no getting around the fact that this spread seems to be on the fence when it comes to dropping clues about the future. That’s good news in the sense that Mr. Market hasn’t thrown in the towel on the economic outlook. However, it would be an especially discouraging sign at this juncture if the stock market tumbles substantially from current levels. In that case, there’d be a new reason to worry.
For now, it seems safe to say that the market’s taking last week’s mixed economic news in stride. The stock market slipped last week, but only modestly, and with Friday’s gain there’s reason to think that the bulls are still in control. Despite discouraging news with initial jobless claims and the uptick in the jobless rate for April, the crowd seems inclined to see the glass as half full rather than half empty. Maybe that’s because private-sector job growth last month was the strongest since the recession ended.
There’s been no shortage of mixed messages on the economic front lately. No wonder that Mr. Market appears to be hedging his forecasting bets. The future is always uncertain, and sometimes it’s more uncertain than usual. If history’s a guide, forecasting will get a bit easier, for good or ill. But for now, fence-sitting is the sport du jour, although this too shall pass. Stay tuned…