Judging by several key economic indicators, it’s reasonable to assume that inflation will remain steady a moderate pace. US GDP growth in the first quarter quickened to a solid 3.2% increase and the labor market expanded at a strong pace in April. Later this year, the expansion will become the longest on record for the US. Such numbers suggest that inflation should be stable if not accelerating. But for reasons that no one fully understands, pricing pressure has been tepid and may be poised to slow further in the months ahead.

“The picture on inflation is puzzling this far into an expansion,” said Fed Governor Lael Brainard. “Despite the strengthening of the labor market, the measure of core inflation excluding volatile food and energy prices did not move up to 2 percent on a sustained basis until last year, and in the most recent reading, the 12-month change has moved down to 1.6 percent.”

Minneapolis Fed President Neel Kashkari on Thursday reasoned that the persistence of low inflation suggests that the central bank is too hawkish. “With inflation somewhat too low and the job market still showing capacity after 10 years, the only reasonable conclusion I can draw is that monetary policy has been too tight in this recovery,” he said.

Although some inflation yardsticks show that the pricing trend is more or less holding at or near the Fed’s 2% target, the March report on personal consumption expenditures (PCE) inflation looks worrisome. Notably, the widely followed core PCE slipped to a 1.6% annual rate, the lowest since September 2017. 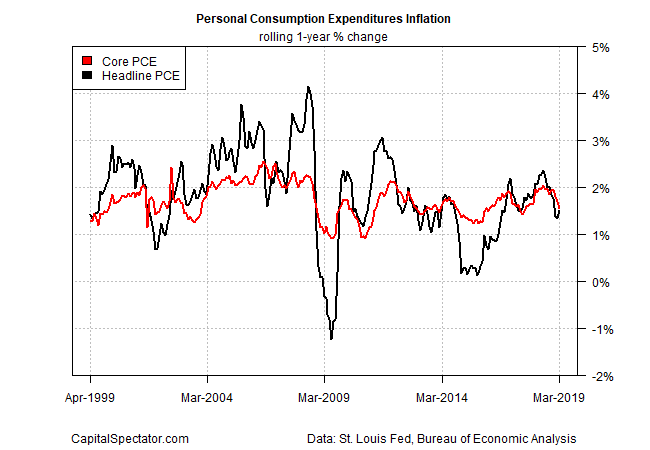 The April report on consumer price inflation is moderately higher: the core reading rose 2.1%, up a tick from the previous month. The firmer trend may be a sign that PCE data will follow suit when the April figures are published later this month.

The Treasury market, however, is inclined to err on the side of caution and has recently been downgrading the inflation outlook, based on the implied forecast via the yield spread on nominal less inflation-indexed maturities. The 5-year Notes, for instance, are estimating future inflation at 1.75%, down from nearly 1.9% last month and over 2% as recently as last October. 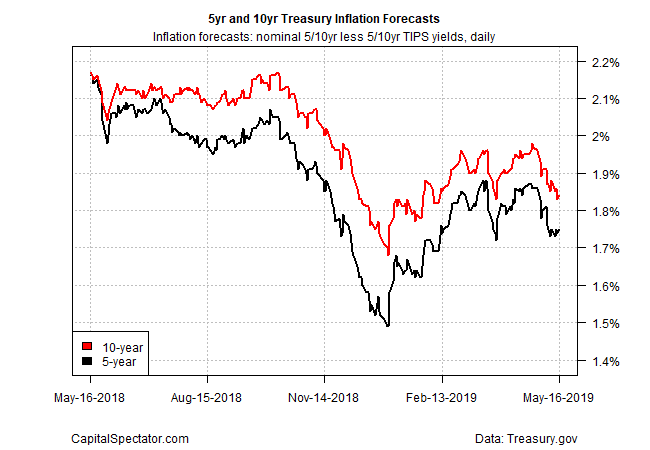 Softer inflation is also the outlook for core CPI’s one-year trend, based on average point forecast via The Capital Spectator combination-forecasting model. The current 2.1% year-over-year rise is expected to gradually, persistently slide below the Fed’s target in the months ahead. 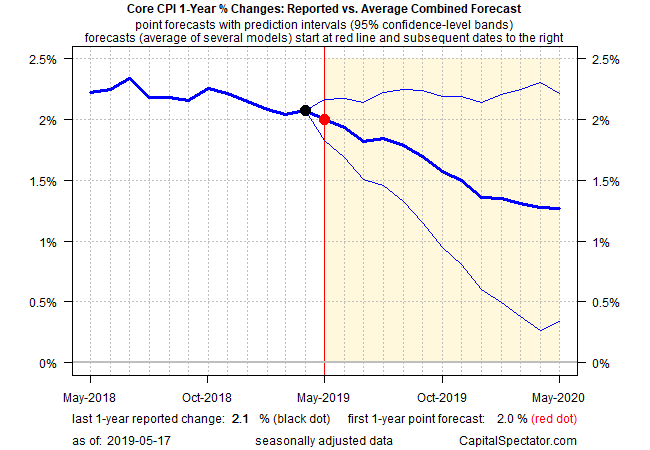 Veteran Fed watcher Tim Duy, an economist at the University of Oregon, wrote last week that the case is building for a rate cut. He noted, however, that “market participants are looking for a rate cut that the Fed isn’t ready to give.”

Fed funds futures are currently estimating a high probability (87%) that the central bank will leave its 2.25%-2.50% target rate unchanged at next month’s policy meeting, according to CME data. The no-change probability slips to 72% for the July FOMC meeting, but starting in September and beyond the futures market is pricing in a 50%-plus probability that the Fed will trim rates.

Switching to a dovish bias may appear unusual in the wake of the strong GDP and labor market indicators. But elsewhere the numbers suggest that a more cautious outlook may be warranted. Notably, retail spending and industrial production fell in April. Meanwhile, the yield curve is flat for the 10-year/3-month spread, which suggests that the market is anticipating that economic activity will slow.

Meantime, a new Reuters poll finds that most economists think US recession risk has increased lately. A downturn isn’t likely in the immediate future, but looking beyond a couple of months is effectively a guessing game.

As such, the next batch of data could be critical for changing the outlook. Along the way, the Fed’s credibility may be hanging in the balance. If the annual rate of core PCE inflation slips further in the April update that’s due at the end of the month, the central bank may be forced to cut rates as early as next month.

That would suit Kashkari, who charges that the Fed has erred in raising rates.

For our current framework to be effective and credible, we must walk the walk and actually allow inflation to climb modestly above 2 percent in order to demonstrate that we are serious about symmetry. Make-up strategies such as price-level targets offer this attractive feature. But we must honestly ask ourselves: If we felt compelled to raise rates when inflation was below target in this recovery, would we really keep rates low when inflation is above target next time? Count me as skeptical.

One thought on “Is The Fed Losing Control Of Inflation?”