The outlook for US growth in the fourth quarter is still muted vs. Q3’s pace, according to recent updates from various sources. The strong 3.2% increase in Q3 is expected to decelerate to around 2% and hold at that pace in Q1 2017, picking up slightly as the new year unfolds.

The Wall Street Journal’s new survey data for this month shows that the average Q4 forecast inched up to 2.3%, slightly above last month’s 2.1% estimate. Even so, the current estimate is still well below the 3.2% rise in Q3—a two-year high. 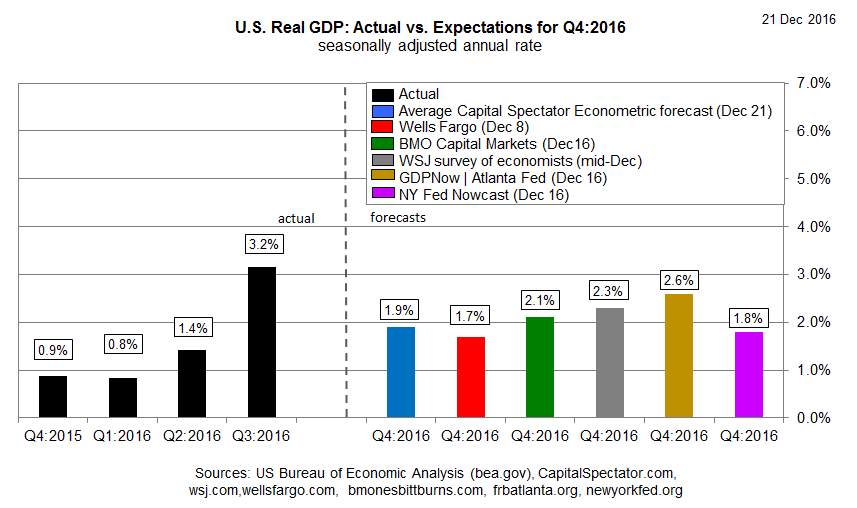 Last week’s nowcast from the New York Fed is especially weak, anticipating Q4 growth of just 1.8%. Weighing on the bank’s Dec. 16 estimate: weak projections for industrial activity in the final quarter of this year.

By contrast, the Atlanta Fed’s Dec. 16 nowcast is relatively upbeat. The bank’s GDPNow model is projecting Q4 growth at 2.6%.

Does 2017 look any better in the wake of Donald Trump’s election last month? That’s the general assumption. Media reports advise that the next occupant of the White House will roll out new policies (lower taxes, lighter regulation, and infrastructure spending) that’s designed to boost economic growth. Such plans appear to have lifted the public’s expectations, according to a new Gallup survey. 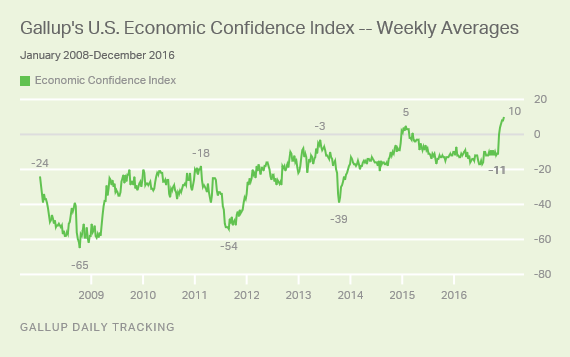 Economists, however, remain cautious. As CNBC reported earlier this month:

Business economists expect the U.S. economy to pick up speed next year, but not as quickly as Donald Trump promised during the election campaign.

In their latest economic outlook, forecasters surveyed by the National Association for Business Economics said they expect the U.S. gross domestic product to end 2016 with an average annual growth rate of just 1.6 percent, before strengthening next year to a 2.2 percent annual growth rate.

New survey data published yesterday by FocusEconomics shows that economists are expecting a gradual but modest improvement in GDP growth in 2017. Analysts project that US output will hold at a 2.0% increase in next year’s Q1, ticking up to 2.2% in Q2 and 2.3% in Q3 and Q4. Nonetheless, the mild improvement is expected to remain well below this year’s Q3 gain of 3.2%.

In sum, economists in general aren’t convinced that a sharp upturn in US economic growth due to Trumponomics is fate. One reason, according to University of Oregon macroeconomist Mark Thoma, is skepticism about the effects of tax cuts on growth. “If the evidence on the costs and benefits is evaluated honestly, I don’t believe that most of the policies that Trump has suggested – infrastructure spending done correctly is perhaps an exception – can be supported.”

Considering the latest survey data, it appears that reluctance to buy into the Trumponomics argument remains widespread among dismal scientists.

One thought on “US Q4 GDP Growth Estimates Remain Subdued”